to Host Investor/Media Event and Webcast on at

, (GLOBE NEWSWIRE) -- (Nasdaq: CYTK) today announced that the full results from REDWOOD-HCM (Randomized Evaluation of Dosing With CK-274 in Obstructive Outflow Disease in HCM), the Phase 2 clinical trial of aficamten in patients with hypertrophic cardiomyopathy (HCM), and additional results from GALACTIC-HF (Global Approach to Lowering Adverse Cardiac Outcomes Through Improving Contractility in Heart Failure) assessing the effect of omecamtiv mecarbil in Black patients with heart failure (HF) with reduced ejection fraction (HFrEF), were presented in a Late Breaking Clinical Trials session at the (HFSA) Annual in , and virtually online.

REDWOOD-HCM: Full Results Demonstrate Improvements in LVOT-G, NT-proBNP and NYHA Class in Patients Treated with Aficamten with Reversibility After Discontinuation

, M.D., Director, Hypertrophic Cardiomyopathy Center; , and Principal Investigator of REDWOOD-HCM presented the primary results of REDWOOD-HCM. The baseline characteristics of patients in REDWOOD-HCM were consistent with a symptomatic patient population with high resting and Valsalva gradients reflective of substantial burden of disease. Treatment with aficamten for 10 weeks resulted in statistically significant reductions from baseline compared to placebo in the average resting left ventricular (LV) outflow tract pressure gradient (LVOT-G) (p=0.0003, p=0.0004, Cohort 1 and Cohort 2, respectively) and the average post-Valsalva LVOT-G (p=0.001, p<0.0001, Cohort 1 and Cohort 2, respectively). The majority of patients treated with aficamten (78.6% in Cohort 1 and 92.9% in Cohort 2) achieved the target goal of treatment, defined as resting gradient <30 mmHg and post-Valsalva gradient <50 mmHg at Week 10 compared to placebo (7.7%).

Reductions in LVOT-G occurred within two weeks of initiating treatment with aficamten, were maximized within two to six weeks of the start of dose titration and were sustained until the end of treatment at 10 weeks. Reversibility of the pharmacodynamic effect of aficamten was seen after a two-week washout, with resting LVOT-G, post-Valsalva LVOT-G, NT-proBNP and LVEF returning to baseline values. The observed reductions in LVOT-G were dose dependent, with patients achieving greater reductions of LVOT-G with increasing doses of aficamten. Over the 10-week study period, patients treated with aficamten in both Cohort 1 and Cohort 2 also experienced statistically significant reductions in NT-proBNP (p=0.003) (Figure 1). Treatment with aficamten was also associated with an improvement in heart failure functional class as measured by (NYHA) class. Improvement by at least one class was achieved by 31% in the placebo group, 43% of patients in Cohort 1 (p>0.1) and 64% of patients in Cohort 2 (p=0.08) (Figure 1).

Figure 1. Change from Baseline in NT-proBNP and NYHA Class is available at https://www.globenewswire.com/NewsRoom/AttachmentNg/04143a1d-b002-4ac6-b3b7-70ccbf60c25a

Treatment with aficamten in REDWOOD-HCM was generally well tolerated. Overall, the incidence of adverse events was similar between treatment arms, there were no treatment emergent adverse events that resulted in treatment interruption or discontinuation, and no serious adverse events ascribed to aficamten by investigators. All patients completed treatment per protocol.

“Results from REDWOOD-HCM underscore the potential clinical utility of aficamten based on the elimination of resting outflow tract gradients in nearly all patients, substantial improvement in heart failure symptoms, rapid onset and reversibility of effect, and the ability to use precise echo-guided titration without treatment interruptions,” said , M.D., Director, Hypertrophic Cardiomyopathy Center; , and Principal Investigator of REDWOOD-HCM. “We look forward to investigating aficamten further in a large Phase 3 clinical trial that we expect to start by year end.”

Figure 2. Primary Outcome in Black Patients Enrolled in GALACTIC-HF is available at https://www.globenewswire.com/NewsRoom/AttachmentNg/e62cddd3-b548-422a-8207-a0b2a52d133e

A great majority of Black patients in GALACTIC-HF (n=535, 95%) were enrolled in (n=357), (n=78) and (n=100). Black patients enrolled in these countries were younger, more often female, had lower ejection fraction (EF), more often had hypertension and diabetes, and were less likely to have atrial arrhythmias or ischemic etiology compared to white patients (each p≤0.001). An analysis of Black patients enrolled only in these three countries showed that, compared to white patients from the same countries, they had a statistically similar overall benefit from treatment with omecamtiv mecarbil (HR=0.83 vs. HR=0.88), with a numerically greater risk reduction in hospitalization (HR=0.81 vs. HR=0.90).

“These analyses are particularly important because compared to other racial or ethnic groups Black patients have higher risk of heart failure, worse outcomes, and have historically been underrepresented in clinical research,” said , M.D., FACC, Section Head, Advanced Heart Failure and Transplant Cardiology; Co-Director, , . “GALACTIC-HF enrolled the most Black patients among recent heart failure trials, accounting for 29% of enrollment in , and this robust enrollment has allowed us to be more confident about the favorable effect of omecamtiv mecarbil in Black patients with heart failure.”

Members of Cytokinetics’ senior management team will host a conference call and webcast tomorrow, , at . The webcast can be accessed through the Investors & Media section of the website at www.cytokinetics.com. The live audio of the conference call can also be accessed by telephone by dialing either (866) 999-CYTK (2985) ( and ) or (706) 679-3078 (international) and typing in the passcode 2994714.

Aficamten is an investigational selective, small molecule cardiac myosin inhibitor discovered following an extensive chemical optimization program that was conducted with careful attention to therapeutic index and pharmacokinetic properties that may translate into next-in-class potential in clinical development. Aficamten was designed to reduce the number of active actin-myosin cross bridges during each cardiac cycle and consequently suppress myocardial hypercontractility that is associated with hypertrophic cardiomyopathy (HCM). In preclinical models, aficamten reduced myocardial contractility by binding directly to cardiac myosin at a distinct and selective allosteric binding site, thereby preventing myosin from entering a force producing state.

The development program for aficamten is assessing its potential for the treatment of HCM and to improve exercise capacity and relieve symptoms in patients with hyperdynamic ventricular contraction and includes REDWOOD-HCM, a Phase 2 clinical trial designed to evaluate the effect of treatment with aficamten compared to placebo on measures of safety, tolerability as well as pharmacodynamics and biomarkers.

Hypertrophic cardiomyopathy (HCM) is a disease in which the heart muscle (myocardium) becomes abnormally thick (hypertrophied). The thickening of cardiac muscle leads to the inside of the left ventricle becoming smaller and stiffer, and thus the ventricle becomes less able to relax and fill with blood. This ultimately limits the heart’s pumping function, resulting in symptoms including chest pain, dizziness, shortness of breath, or fainting during physical activity. A subset of patients with HCM are at high risk of progressive disease which can lead to atrial fibrillation, stroke and death due to arrhythmias. There are no FDA approved medical treatments that directly address the hypercontractility that underlies HCM.

Omecamtiv mecarbil is an investigational, selective, small molecule cardiac myosin activator, the first of a novel class of myotropes1 designed to directly target the contractile mechanisms of the heart, binding to and recruiting more cardiac myosin heads to interact with actin during systole. Omecamtiv mecarbil was designed to increase the number of active actin-myosin cross bridges during each cardiac cycle and consequently augment the impaired contractility that is associated with heart failure with reduced ejection fraction (HFrEF). Preclinical research has shown that omecamtiv mecarbil increases cardiac contractility without increasing intracellular myocyte calcium concentrations or myocardial oxygen consumption.2-4

The development program for omecamtiv mecarbil is assessing its potential for the treatment of HFrEF and includes GALACTIC-HF and METEORIC-HF, a Phase 3 clinical trial designed to evaluate the effect of treatment with omecamtiv mecarbil compared to placebo on exercise capacity.

Heart failure is a grievous condition that affects more than 64 million people worldwide5 about half of whom have reduced left ventricular function.6,7 It is the leading cause of hospitalization and readmission in people age 65 and older.8,9 Despite broad use of standard treatments and advances in care, the prognosis for patients with heart failure is poor.10 An estimated one in five people over the age of 40 are at risk of developing heart failure, and approximately 50 percent of people diagnosed with heart failure will die within five years of initial hospitalization.11,12 More than 2 million people in the are estimated to have an ejection fraction <30%, indicating they may have severe heart failure.13

is a late-stage biopharmaceutical company focused on discovering, developing and commercializing first-in-class muscle activators and next-in-class muscle inhibitors as potential treatments for debilitating diseases in which muscle performance is compromised. As a leader in muscle biology and the mechanics of muscle performance, the company is developing small molecule drug candidates specifically engineered to impact muscle function and contractility. is preparing a NDA submission of omecamtiv mecarbil, its novel cardiac muscle activator, following positive results from GALACTIC-HF, a large, international Phase 3 clinical trial in patients with heart failure. is conducting METEORIC-HF, a second Phase 3 clinical trial of omecamtiv mecarbil. is also developing aficamten, a next-generation cardiac myosin inhibitor, for the potential treatment of hypertrophic cardiomyopathies (HCM). The company has announced positive results from Cohorts 1 and 2 in REDWOOD-HCM, a Phase 2 clinical trial of aficamten in patients with obstructive HCM. expects to start a Phase 3 clinical trial of aficamten in patients with obstructive HCM in Q4 2021. is also developing reldesemtiv, a fast skeletal muscle troponin activator, currently the subject of COURAGE-ALS, a Phase 3 clinical trial in patients with ALS. continues its over 20-year history of pioneering innovation in muscle biology and related pharmacology focused to diseases of muscle dysfunction and conditions of muscle weakness.

This press release contains forward-looking statements for purposes of the Private Securities Litigation Reform Act of 1995 (the "Act"). disclaims any intent or obligation to update these forward-looking statements and claims the protection of the Act's Safe Harbor for forward-looking statements. Examples of such statements include, but are not limited to, statements relating to the GALACTIC-HF or REDWOOD-HCM clinical trials, statements relating to the potential benefits of omecamtiv mecarbil or aficamten, and statements relating to the potential submission of an NDA for omecamtiv mecarbil. research and development activities; the design, timing, results, significance and utility of preclinical and clinical results; and the properties and potential benefits of other drug candidates. Such statements are based on management's current expectations, but actual results may differ materially due to various risks and uncertainties, including, but not limited to, potential difficulties or delays in the development, testing, regulatory approvals for trial commencement, progression or product sale or manufacturing, or production of drug candidates that could slow or prevent clinical development or product approval; drug candidates may have adverse side effects or inadequate therapeutic efficacy; the FDA or foreign regulatory agencies may delay or limit ability to conduct clinical trials; may be unable to obtain or maintain patent or trade secret protection for its intellectual property; standards of care may change, rendering drug candidates obsolete; and competitive products or alternative therapies may be developed by others for the treatment of indications drug candidates and potential drug candidates may target. For further information regarding these and other risks related to business, investors should consult filings with the .

Change from Baseline in NT-proBNP and NYHA Class 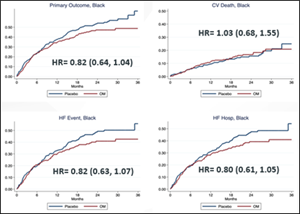